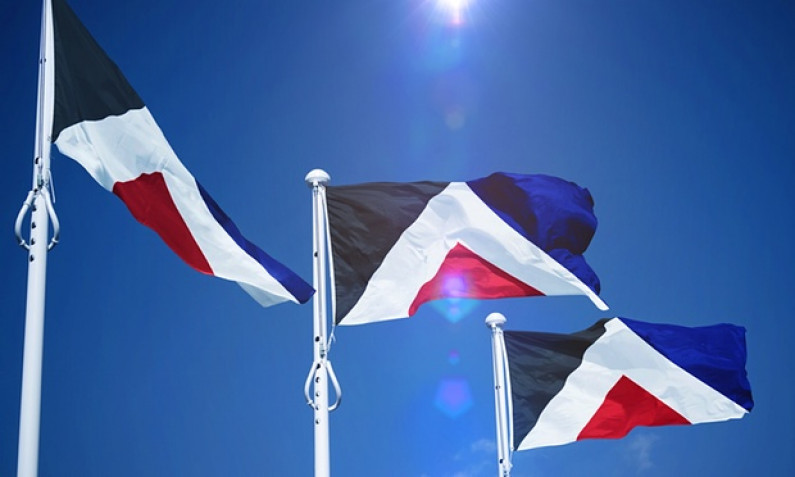 Firstly, to clarify our position, we don’t believe the current New Zealand flag needs to, or should, be changed. It’s been the national flag for little more than one hundred years, but during that brief time many have fought and died under it. Others have celebrated sporting success. True, it’s a version of the Royal Navy Blue Ensign with the Southern Cross added to symbolise New Zealand’s position in the South Pacific. This is part of its history. It tells a story. And, while it is sometimes confused with the similar Australian Flag, it also points to New Zealand and Australia’s common origins.

That said, we’re pleased that the ‘Red Peak’ design has been added to the very lacklustre ‘top four’ designs that have been foisted on the New Zealand public by the Flag Selection Committee. The ‘top four’ are an exercise in brand design, largely driven by the fact that Prime Minister John Key has expressed a preference for a silver fern on the flag. Initially it looked as if New Zealand would get a version of the All Blacks flag, but thanks to the New Zealand Rugby Union’s trademark protection position, combined with a special mention for the ISIS (ISIL) black flag, this didn’t happen. Instead we got three identical ‘fern’ designs (the PM’s favourite) in different colourways. Each design includes a Southern Cross to appease traditionalists. The fourth design was a token ‘koru’ (has anyone pointed our that this curvilinear design is an ‘immature’ fern frond?) to pacify Māori. Hardly an exciting proposition.

John Key has justified his stance by pointing out that the silver fern is found on the graves of the men who fought and died on the battlefields of Europe in the First and Second World Wars (which has completely failed to placate the Returned Services Association). He has also pointed out that for over 100 years the silver fern been worn on the left breast of our sporting superstars the All Blacks. It’s proudly displayed during ‘black outs’ at All Black games (invariably with the words ‘All Blacks’ immediately below it in the approved brand typeface). Versions have been found on singlets worn by New Zealand athletes competing in the Olympic and Commonwealth Games. On the strength of this international success it’s also been used by New Zealand exporters. You’ll also find it on John’s left lapel. But John, we can’t all be All Blacks. There’s a lot more to New Zealand than rugby and sporting success and a fern-based design doesn’t tell anything like the whole story of what New Zealand is about.

The ‘Red Peak’ design, added to the ‘top four’ after public outcry over its omission, is different. Unlike the others it’s not a branding exercise. It tells a story; according to its designer Aaron Dustin the flag, which features a white chevron surrounded by red, blue, and black coloured triangles, eschews familiar New Zealand iconography such as the fern, koru, kiwi, and Southern Cross in favour of a ‘new’ symbolic language. The design, a simplified reference to the geometric elements of Maori tāniko pattern, represents the uniqueness of New Zealand's land, light, and position. The white chevron refers to the collision of the two tectonic plates which form the Southern Alps, while the coloured triangles symbolise the red earth, black night, and blue dawn, a reference to the Rangi and Papa creation story in Māori mythology. The flag also notes New Zealand's prominence as one of the first countries to "hold the light of new day".

Dustin has done his homework. He has not created a commercial brand for ‘New Zealand Incorporated’. What he has done is tell a compelling ‘back story’ that has engaged normally passive New Zealanders. His design has the support of vexillologists as following many of the criteria associated with flag design including the way it drapes on a flagpole and can be viewed from both sides. And most importantly, it’s so simple a child could easily draw it.

At the end of the day will any of the designs submitted for public referendum inspire the New Zealand public to run out and buy flagpoles for our businesses and our front lawns? Will we hang it on our living room walls? It’s unlikely. New Zealanders are not that kind of people.